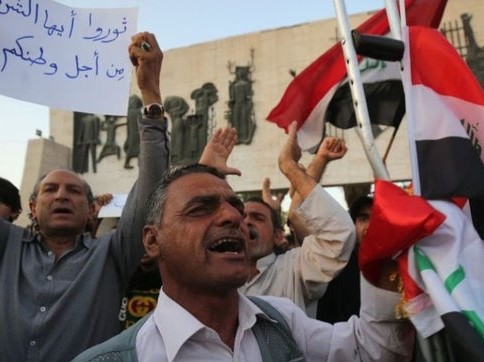 Dozens killed and detained throughout Iraq, including members of the Iraqi Communist Party.
ICP, 12 October 2019

Popular protests began in Iraq on the 1st of October and quickly spread from Baghdad to other cities, becoming a widespread nationwide popular movement but at the same time facing widespread assaults and repression. The Iraqi Communist Party released a statement on October 2, describing the protests as "a real warning to the government and dominant political forces, that are responsible for the tragic situation in the country and the dire living conditions of the citizens, especially the poor, toilers and youth, and its repercussions demonstrated by the current state of unprecedented anger."

According to the analysis of the Party, the depth of the gap between the masses of the people and this system and the rampant corruption has been exposed. The protests have confirmed that the power-sharing quota approach followed by the political process does not lead to any solutions, but rather perpetuates and exacerbates crises, and does not provide a minimum level of social justice.

The Part affirmed the following principles and measures:

1-  Peaceful demonstrations are a constitutional right that must not be violated, under any pretext or justification.

2-  The duty of state institutions, including the military and security, is to provide protection to demonstrators and protesters.

3-   We condemn and denounce the acts of repression and violence against the demonstrators, whatever their means: live or rubber bullets, helicopters, hot water, arrests, indecent and insulting words, etc. We call for the setting up of a broad commission of inquiry, that includes civil society organisations and representatives of the protesters, and to hold accountable those who gave orders to use violence and live bullets and bring them to justice.

4- It is imperative to immediately stop the security forces from pursuing the wounded to hospitals, and to release the detainees, in addition to declaring the fallen demonstrators as martyrs of the people and Iraq.

5- Maintaining the peaceful character of the demonstrations and protests in all its forms, and ensuring the protection of public and personal property, is a source of strength for the demonstrators and protesters. The peacefulness of the protest movement must therefore be maintained.

6-  It is necessary to summon the Prime Minister and commander-in-chief of the armed forces, the ministers and the heads of the security services to discuss the current developments in an emergency session of the Parliament.

7-   Our party has been and continues to extend solidarity, providing support and participating with the masses in their just demands. It will always stand by their side and fight to provide a decent and secure life.

On October 4, the Communist Party made another statement, reaffirming its support for this peaceful mass uprising and for the legitimate demands of the protesters, and stressing at the same time the need for halting the violence against them. The Party announced that the time has come to move towards the option of forming a government with exceptional powers, that includes figures known for their patriotism, competence and integrity, and away from the abhorrent power-sharing quota approach. The Party stated the urgent and pressing tasks of this government as follows,

- To declare the victims of the protests as martyrs of the people and release all the detainees among the demonstrators.

- To maintain and provide security and take effective measures to put arms exclusively under the control of the state.

- To begin serious and concrete measures to combat corruption, and to bring those accused of it on all levels, especially the most corrupt, to justice.

- To begin a major campaign to build decent economic houses and distribute them to the poor and all those who do not have homes for their families.

- To form the Public Service Council and entrust it all the appointments in the state, to ensure fair access to job opportunities for all the citizens.

- To allocate monthly salaries to poor citizens and unemployed youth, saving them from want and misery.

- To reduce the salaries of the three presidencies (the President, PM and Speaker of Parliament), ministers, members of Parliament and ‘special grades’ by at least 50%, and abolishing all unjustified privileges and allocations.

- To adopt an immediate and rapid program to promote the productive sectors, which would provide job opportunities.

The Party reiterated its position in support of the just and legitimate demands of the masses of people, and participation in its continuing movement.

By October 5, according to the Iraqi “Independent High Commission for Human Rights”, 93 people were killed, 3978 wounded and 567 detained throughout Iraq, including as well members and supporters of the Iraqi Communist Party. The Party called on the United Nations, human rights organizations, Amnesty International and Human Rights Watch to press the Iraqi authorities to stop the repression of demonstrators, to end the use of violence against them, stop chasing the protesters and release the detainees immediately.

The Communist Party of Greece condemned the bloody suppression of mass popular mobilizations and expresses its solidarity with the suffering Iraqi people, who was at the heart of the American imperialist invasion and occupation and is now confronted with the dead ends that are caused by the capitalist mode of production, and the inter-bourgeoisie contradictions.

The Communist Party of Venezuela (PCV) expressed its solidarity with the people of Iraq, who are leading important demonstrations in various cities of the country against the precarious living conditions, and hence demanding concrete policies to improve the economic situation of the country and restore social and labor rights. The PCV rejected the brutal repression exerted by government forces that has resulted in the assassination of dozens of protesters, including militants of the Iraqi Communist Party.

The PCV transmitted its message of condolences to the Iraqi Communist Party facing the loss of valuable activists; at the same time, expressed its solidarity with the important struggles that develop in a context of great difficulty and risks as a result of the persistence of the imperialist military occupation, the attacks of the terrorist forces and now the government repression against the popular demonstrations.