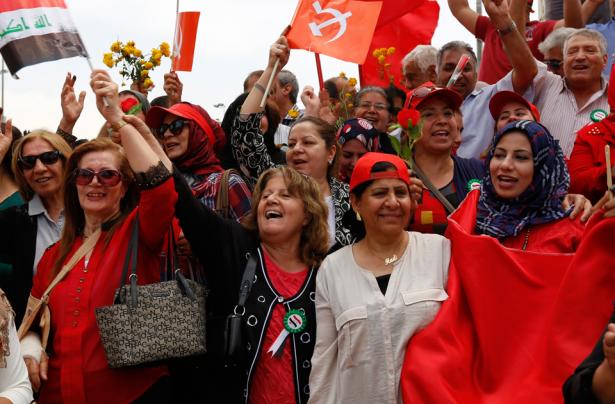 The Tudeh Party of Iran interviewed the Iraqi Communist Party on the success of trans-sectarian ‘Sairoun' Alliance in the recent Iraqi elections.

Salam Ali, Member of the Central Committee of the Iraqi Communist Party was interviewed by ‘Nameh Mardom’, the central organ of the Tudeh Party of Iran on 28 May 2018. According to the CC of the Iraqi CP, the success of the Alliance indicated to the Iraqi people’s approval of an anti-sectarian and anti-corruption political program rejecting foreign interference.

In the parliamentary elections on 12 May, voter turnout was 44.5 per cent which was the lowest since 2006. Previously in 2014, it was 60 per cent. The CP of Iraq interpreted this as an indication of ‘widespread resentment, disillusionment and disaffection with the corrupt ruling elite and their policies and was particularly clear in areas that had been regarded as strongholds of Islamist parties — urban centres, Baghdad and other provinces in central and southern Iraq’. The abstention from voting was seen as an indirect way of boycotting the elections, ‘an expression of resentment — a protest vote’.

CC member Ali told Nameh Mardom that the trans-sectarian approach has been a unique development in Iraqi politics. ‘The fact that it actually emerged from the mass protest movement adds to its political significance, as a grassroots dynamic in the formation of alliances’ he said. ‘It has enhanced an all-encompassing Iraqi national identity and contributed to rebuilding Iraq’s national unity.’

The Iraqi CP declared that it would continue to work with the Sadrist movement and other members of the Sairoun Alliance ‘on the basis of its programme which has adopted and clarified the demands of popular protest movement’. According to the Iraqi CP, the Aliance also converges with the party’s national democratic programme that calls for ‘putting an end to the system of political sectarianism and establishing a democratic civil state based on the principle of citizenship and social justice’.

In the interview Ali explained that the distinguishing feature of the alliance was its emphasis on ‘upholding Iraqi national identity, building state institutions and firmly rejecting foreign interference — both regional and international — in the country’s internal affairs’. The foreign powers were elaborated as the US, Turkey, Iran and Saudi Arabia.  Ali reminded that US and Iranian high-level envoys Brett McGurk and Qasem Soleimani had visited Iraq soon after the elections attempting to influence this process.

Ali asserted that the Sairoun Alliance, as well as the leader of the Sadrist movement, Muqtada al Sadr, are commited to the election campaign promises. He underlined that the Alliance will not accept a return to sectarian-ethnic quota-based power sharing in the formation of the new government. He said, ‘Agreement on the government programme comes first, before discussing who would be the nominee to the post of prime minister and other details’.

Regarding the question of Nameh Mardom on the success of the Communist Party candidates, Ali stated, ‘Comrade Raid Fahmi, the secretary of the central committee, came second in Baghdad and Haifaa al-Amin came third in Thi Qar province in the south. Other party candidates were unfortunately unsuccessful despite an effective election campaign. There were 58 party candidates in 14 provinces.’ This showes an overall increase in the number of votes in comparison to 2014.

On the other hand, the Iraqi CP informed that it is also following the allegations about the manipulation of votes. Serious questions were raised about the separate “special vote” for members of the armed and security forces who number about 700,000, as well as for Iraqi communities abroad numbering 179,000. Both the high threshold for allocating seats and the sectarian-ethnic quota-based Electoral Commission are the priority issues of the Sairoun alliance which plans to reform the electoral system.

Accrediting the role of the Shiite religious leader Ayatollah Sistani, Salam Ali said, ‘It is noteworthy that the message from Ayatollah Sistani, before the elections, that “He who was tried should not be tried’ was interpreted by his followers as advising them not to reelect corrupt rulers. He also stated that it was up to Iraqi citizens to decide to vote or not. On previous occasions he had preached that it was the duty of every Iraqi to vote, which was used by Islamist parties as a pretext to mobilise voters and legitimise themselves as defenders of the sect against its presumed enemies.’