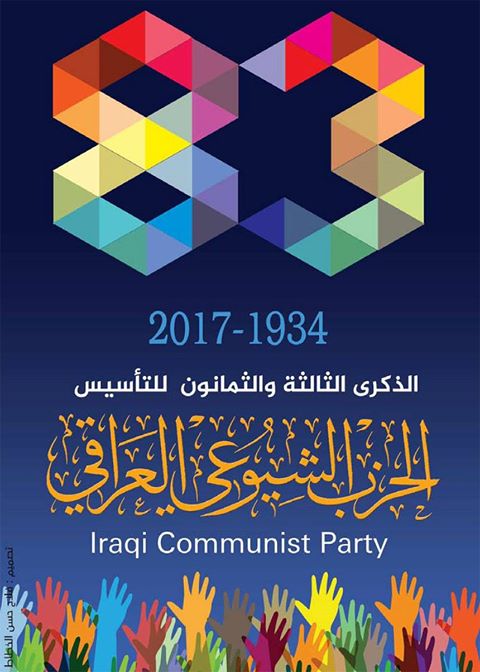 The editorial of “Tareeq Al-Shaab” (People’s Path), the daily newspaper of the Iraqi Communist Party, commemorated the 83rd anniversary of foundation of the Party. The editorial also referred to Party's demand to end the sectarian-ethnic quota system that is voiced in mass demonstrations since last summer.

The 83rd anniversary of the founding of our Iraqi Communist Party on  31st March 2017 was celebrated throughout the country and abroad by its members and sympathizers, according to the editorial. It was said that 'The emergence of an organized political force at the turn of the last century, based on an ideological approach that is committed to justice, equality and freedom from all forms of exploitation, marked the early maturity of the Iraqi national movement.'

The Communist Party, built by 'the enlightened figures of our people’s revolutionary movement' had placed at the core of its main tasks 'defending the immediate class interests of the toilers' and 'their future social aspirations for salvation from the exploitation of man by his fellow man.' This objective was formulated as “a Free Homeland and a Prosperous People”. The Communist Party, challenged by despotic and dictatorial regimes throughout the country's history, had remained faithful to its principles which formed the basis for its 10th National Congress that was held four months ago.

The editorial went as follows:

'Today, in the face of the many challenges facing our country, which include defeating terrorism, resolving the all-encompassing crisis, rebuilding what has been destroyed by wars and devastated by corruption, the Communists and sincere citizens, in all arenas of mass protest, are confronting the system of sectarian and ethnic quotas that is responsible for the crises.They have raised the banner of change, to build a democratic civil state, on the basis of citizenship and social justice, fully determined to achieve it.'

At the beginning of March, the ICP, in an interview in “Nameh Mardom”, the central organ of the Tudeh Party of Iran, had evaluated the attack in 11 February on the mass demonstration in Tahrir (Liberation) Square in central Baghdad as an attack towards the people's opposition against corruption and the sectarian-ethnic quota system. Such demonstrations had been taking place also in other provinces since late July 2015 which called for urgent political reforms and judicial reforms, as well as the provision of basic services. According The Baghdad Post, the ICP had also met with the delegation of the Sadrist Movement to discuss the enhancing cooperation and coordination of peaceful protests.