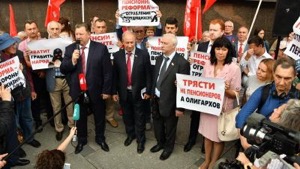 The Communist Party of the Russian Federation conducted a meeting on pension reform, mentioning the inhibition of its anti-crisis program in the parliament.

The International Department of the Communist Party of the Russian Federation (CPRF) reported that the CPRF State Duma deputies conducted a meeting with voters on July 19 near State Duma building in Moscow. The basic theme of the event was dedicated to pension reform, as well as to the referendum on this issue planned by the CPRF.

According to the report, prior to the plenary session aimed at discussing an increase of retirement age, parliamentarians appealed to the audience and mentioned the mass protests across the country trigerred by the anti-people initiative of the government.

CPRF deputies reminded about the anti-crisis program initiated by the CPRF, aiming at creating a budget for development. However, the initiatives of the Communists have been blocked by the pro-Putin United Russia Party.

The speakers noted that ‘the actions undertaken by the Government were beneficial for oligarchs only as they have been keeping people's wealth in their hands’. They called for mass protests to repulse liberal reforms, and to ensure that the individuals who were in charge of these reforms should be permanently deprived of the opportunity to participate in politics.

The Communist MPs demanded the stop of ‘cannibalistic pension reform’ and the resignation of D. Medvedev’s government. The demands were supported by all participants of the action.