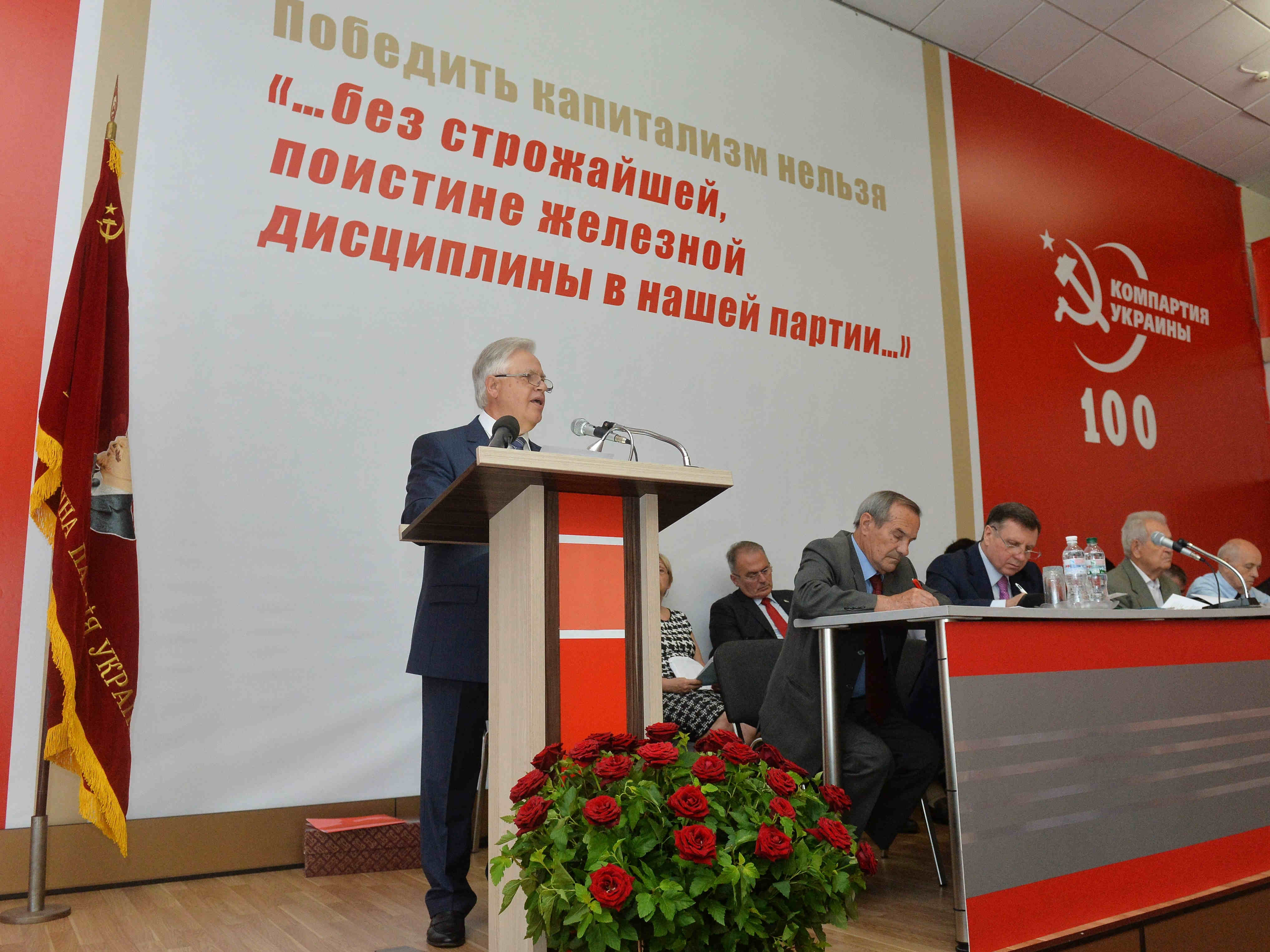 The CC of the Communist Party of Ukraine held an official session in Kyiv dedicated to the 100th anniversary of its establishment and 25th of its restoration.
ICP, 19 July 2018
On July 12, the Central Committee and Central Control Commission of the Communist Party of Ukraine (CPU) held an official session in Kyiv dedicated to the 100th anniversary of its establishment and the 25th anniversary of its restoration. During the session, the First Secretary of the CC, Petro Symonenko, issued a report on the Party history. The Report begins by putting forward that the CPU history has an unbreakable bond with the history of the Communist Party of the Soviet Union (CPSU) and with activities of Vladimir Ilyich Lenin. It is claimed that it was the Great October socialist revolution that made it possible for Ukraine to obtain her nationhood. Despite the reluctance of the Ukrainian people to separate from Russia, Bolsheviks of Ukraine and Great Russia were aware of the need to transform Russia into a union (federation) of Soviet (and really free) republics.
In April 1918, Ukrainian communists gathered in Taganrog in order to combine communist organizations in Ukraine into an independent Communist Party (Bolsheviks) of Ukraine (CPbU) with its own central committee and sessions and discussed the status of this structure. Accordingly, Lenin’s central committee of Bolshevik Party accepted without reservations the right of Ukrainian communists to create their independent party. On July 12, 1918, the first session of the CP(b)U elected and initiated the activities of a single governing body for a newborn party, its central committee consisting of 15 members and 6 candidate members. These were die-hard and respected Bolsheviks who earned the honorable right to head the party due to their many years of dedicated struggle against Tsarism, active participation in the October revolution and the establishment of Soviet authority in Ukraine.
Symonenko asserts that the period of Soviet Ukraine and especially the period of decadence of so-called independent Ukraine following the anti-socialist coup of 1991 fully confirmed the correct historical choice of the CPU in favor of preserving the organizational and ideological unity of Lenin’s Bolshevik Party. The First Secretary points out that the establishment of the Ukrainian Soviet Socialist Republic had been a relevant initiative in the creation of the Union of Soviet Socialist Republics (USSR). He writes that seven decades of the Soviet Union existence have verified the historical choice of the Ukrainian people and its political avant-garde. At the time when Joseph Stalin was in rule, Ukraine transformed from an agricultural into an industrial republic in the 1930's. Nevertheless, Ukraine, which had become one of the most developed countries in the world by its social and economic development under the Soviet government, lost at least a third of its real economy after the process of aggressive decommunization. Symonenko honors the former cadres of the CPU, who were all faithful to the communist idea and who aspired to improve the life of people and make Ukraine a prosperous state. On the other hand, he criticizes the pro-government historians of contemporary independent Ukraine who go the way of mythologizing, falsifying, distorting, and totally slandering the CPU activities.
After its illegal ban in August 1991, the CPU was restored on July 12, 1993 in a session held in Donetsk. Whereas the Party was getting consolidated in all levels, the governing echelons did not hesitate to use the dirtiest methods in order to damage people's respect towards communists. Symonenko comments, "These facts, and the list is by no means exhaustive, have shown that there will be no easy life for the communists in a bourgeois state. This is the way bourgeois democracy is!" In December 2001, the Constitutional Court of Ukraine deemed the ban on the CPU unconstitutional and canceled it. However, the Party became once again illegal after a nationalist-oligarchic regime of a Nazi type was established with the February 2014 state coup. On behalf of all CPU members, Symonenko expresses sincere gratitude to the communist and worker parties of the world expressing their indignation with disgraceful actions of the authorities against the CPU and stating their solidarity and support for the undefeated communists of Ukraine.
At the end of his report, Symonenko underlines the necessity to bring together all progressive forces in order to form a wide civil movement for fighting neo-Nazism and adopting social injustice and explains the current tasks that shape the works of the CPU right now.
See the link for Symonenko's report in Russian and English.
Tweet