CP-backed Joint List becomes the third in the Knesset 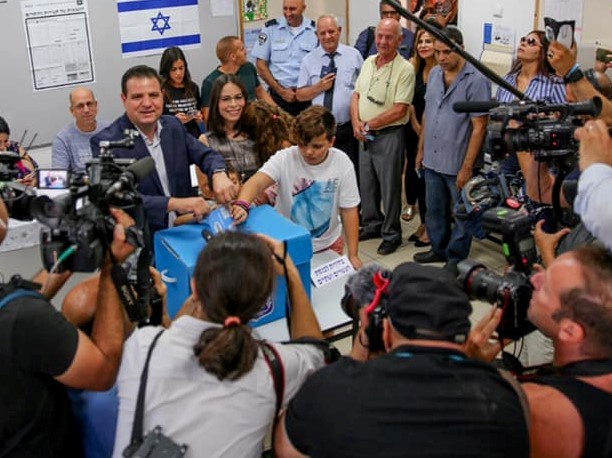 Activists of the CP of Israel are glad that Netanyahu did not have a majority to form a coalition.
ICP, 21 September 2019

According to the results of the general elections of September 17, the Joint List supported by the Communist Party of Israel received 10.62% of all valid ballots cast, giving it 13 seats in the 22nd Knesset, the same number it won four and a half years ago when it first ran for the 20th Knesset in March 2015, thereby making it once again the third largest bloc in Israel’s parliament.

The Joint List MK’s and many Hadash and Communist Party activists said that they were delighted that far-right Prime Minister Benjamin Netanyahu did not have a majority to form a coalition. On the day of the elections, Joint List head, Hadash MK Ayman Odeh declared, "Every vote for the Joint List will allow us to fight for peace, equality and social justice for everyone. We will continue to fight the crime epidemic, for master building plans, and for budgets for education and infrastructure. No one will give us the influence and rights that we deserve; we need to take them by ourselves." The Joint List made a special appeal to Jewish voters in the final day before Tuesday’s election, accusing Prime Minister Benjamin Netanyahu of racist incitement. “Who understands what it’s like to be persecuted like the Jews do?” Odeh asked. “Today, we [Arab-Palestinians in Israel] are a persecuted minority. Either we win together, or we will lose separately.” The previous week, 100 Israeli academics had signed an ad published on Ha’aretz, calling on the Israeli Jewish public in Israel to vote for the Joint List. The headline of the ad read “We’re in! Are you?” and said the Joint List is “home for all those who believe in full civil and national equality for Arabs and Jews, ending the occupation, democracy, peace and social justice.”

Member of the Knesset Yousef Jabareen, head of the Joint List’s International Relations Committee, told the Middle East Monitor this week, “The results show a serious increase in the support of the Joint List, which proves that uniting in one list was greeted positively in our community and resulted in invaluable cooperation in the field. They also boost our struggle to achieve equality and peace, both inside Israel and within the international arena.” According to MK Jabareen, the election results “will also block the way for Netanyahu to establish an extreme right-wing government. In fact, many in our community believed that Netanyahu could be defeated and they came to vote in order to be part of this change. In spite of Netanyahu’s politics of incitements and hate, we succeeded in sending a message of possible change to our supporters, and to promote the politics of hope.”

So while the much anticipated possibility of toppling Netanyahu and the right-wing political factions could have, in MK Yousef Jabareen’s view, constituted one step further along the path to gaining rights for Arab-Palestinian citizens of Israel, and might have possibly strengthened the determination to establish a Palestinian state, in the post-election political chaos that appears to be heading towards a severe governmental crisis, one probably far beyond that which we are now witnessing, such progress appears very remote. What’s more, the dangers within Israel, given today’s volatile regional and global situation, may converge with those emanating from other theaters, near and far, and ignite a general conflagration the results of which we dread to imagine.

Visit the website of the CP of Israel for further details.