Constitutional Court of Ukraine commits a crime against historical memory 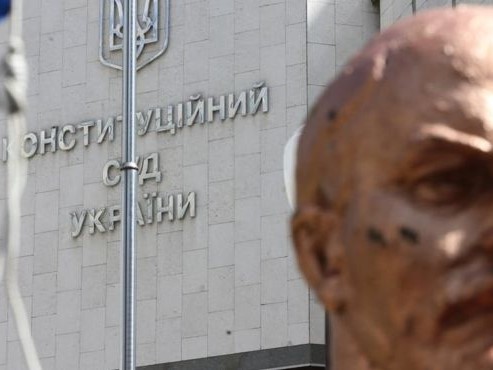 CP of Ukraine warns about a new wave of repression against communists.
ICP, 19 July 2019
On July 16, 2019, the Constitutional Court of Ukraine (CCU) recognized as constitutional the Law of Ukraine "On the condemnation of the communist and national socialist (Nazi) totalitarian regimes in Ukraine and the prohibition of propaganda of their symbols" dated April 9, 2015. The Communist Party of Ukraine states that the decision contrasted with the expectations and opinions of leading experts in the field of constitutional law and human rights in Ukraine. The Party adds that the Constitutional Court based this decision solely on political motives.
The following quotes from the arguments to substantiate the decision show that the Court had political rather than legal motives.
“By their criminal nature, the communist and Nazi regimes were the same, and their methods of implementing the state repressive policy were identical. These regimes categorically denied the possibility of the existence of a Ukrainian independent state, pursued its supporters and obstructed the Ukrainian national revival.”
“ ... several generations of Ukrainians lived in an atmosphere of universal fear for the lack of freedom, were under conditions of arbitrary restriction of civil, political and other rights and freedoms ”
“One of the main reasons for the greatest human losses in the USSR, in particular in Ukraine, during the Second World War was that the Nazi regime and the communist regime had the same anti-human essence”
“For several decades, the red star, images of crossed sickle and hammer and other symbols of the communist regime widely used by the anti-Ukrainian forces to spread an atmosphere of fear, hatred and aggression, to deny the right of the Ukrainian people to their own independent state.”
As a result, the Court concluded, “the condemnation of the Nazi and communist regimes by the Law and the prohibition of the use of their symbols are stipulated by the legitimate aim - to prevent a return to the totalitarian past."
The Communist Party boldly underlines that this decision is purely political, and has nothing to do with law. According to the statement of the Party, obviously, appointed by the regime of ex-President Poroshenko, the majority of the CCU judges implemented the political order of their “boss”, committed a crime against historical memory, the Constitution of Ukraine and standards of the protection of human rights. The Party has the expectation that this decision may unleash a new wave of repression against the Communist Party, its members and supporters.
The Party calls for urgent support:
"Any actions and statements condemning the criminal decision of the Constitutional Court and the repression of the ruling regime will be useful to us! In addition, we ask you to use all possible levers of influence in international organizations, national governments in order to condemn this criminal decision of the CCU, in order to impose national and international sanctions on individuals, involved in the adoption of this CCU decision, politicized and criminal in nature and form."
Tweet