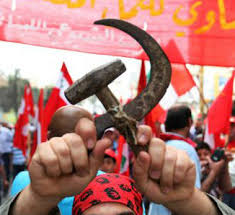 The Lebanese Communist Party released the statement of the Arab Left Forum, denouncing the election of the Israel representative as the coordinator of the 6th committee of the United Nations

The Arab Left Forum denounced the election of the Israeli representative as the coordinator of the 6th committee of the United Nations responsible for the legal issues and terrorism.

The full text of the statement of the LF released by the Lebanese Communist Party is s follows:

to electing Israeli as chief of a UN committee

The Arab Left Forum (ALF) condemns electing a member of the Israeli enemy state delegation to the United Nations 6th committee (legal committee), in agreement with some Arab states. ALF considers this step to be a serious violation to the international legitimacy system and its history, and undermines the role which is supposed to be played by the United Nations- that is helping in promoting justice around the world. In fact, the Israeli occupation is now the last colonial power in the World, and the latter entity was continuously violating international resolutions; remarkably International Resolution number 194 which stipulates on the rights of the Palestinian refugees to return to their homeland, and other set of resolutions calling for Israel withdrawal from the occupied territories in Palestine, Syria, and Lebanon.

The ALF strongly condemns the fact that Israel’s nomination to head this committee was issued from Western European countries bloc, and considers this as an additional proof of the double standards policy which some states resort to, especially around issues related to the Arab Region. Through this nomination, those countries are supporting a typical racist state who had committed in the past, and still committing, crimes against humanity, in different ways against the Palestinian people, in addition to violating basic human rights of the people of Lebanon and Syria.

ALF warns of any attempt by the Israeli enemy, now benefiting from his membership in that committee, to distort and perverse the legal principles that lays the foundations of the UN. In addition, ALF also warns of altering some legal concepts and terms especially those pertaining to the Arab-Israeli conflict. This includes, for example, modifying the internationally agreed concept which forbids the confiscation of land through forceful means, or interpreting Resolution 194 in a selective manner.

ALF calls all Palestinian factions to undertake necessary action confirming the rights of the Palestinian people, particularly the right of return and the right to establish an independent state with Jerusalem as its capital. Moreover, ALF calls all progressive and democratic forces in the Arab Region to organize protest activities, in response to electing Israeli’s official to UN’s legal committee. Such moves should be also accompanied with pressures on states, whether they are the Arab states or the European ones, who supported such election.