The 70th anniversary of the Worker’s Party of Korea 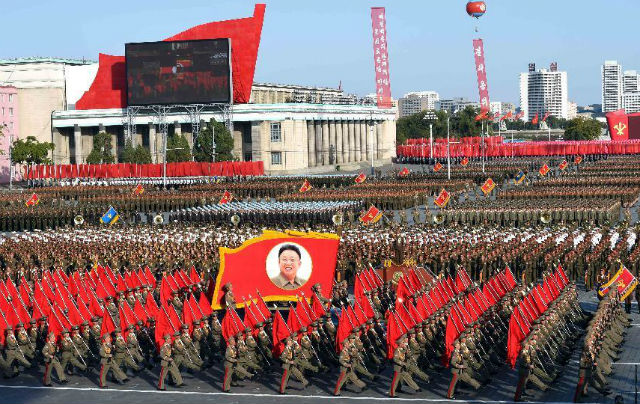 The 70th anniversary of the Worker’s Party of Korea (WPK) was celebrated with a military parade and mass demonstration at Kim Il Sung Square, Pyongyang.

The 70th anniversary of the Worker’s Party of Korea (WPK) was celebrated with a military parade and mass demonstration at Kim Il Sung Square, Pyongyang.
The First Secretary of the WPK, the leader of the Democratic People’s Republic of Korea (DPRK) and the Supreme Commander of the Korean People’s Army Kim Jong Un took the tribune of honor of the square.
In his speech Kim Jong Un said, WPK dauntlessly declares that their revolutionary armed forces are capable of fighting any kind of war provoked by the US and they are ready to protect our people and the blue sky of their motherland.
During the parade, military planes formed the symbol of the WPK and the number 70 in the sky. The military display was followed by a parade of students, workers and Pyongyang residents.
Chinese delegation by Liu Yunshan
People’s Republic of China was represented by a member of the Standing Committee of the Politburo of the Central Committee of the Communist Party of China (CPC), Liu Yunshan, in the event. Liu led a delegation for an official visit to the DPRK. The matter of the nuclear program and the tension in the Korean Peninsula was one of the topics of the visit.
On the tension in the Korean Peninsula, Liu told that maintaining peace and stability benefits all sides and requires efforts from all sides concerned. On the matter of nuclear issue, Liu stated that China is willing to work with DPRK to strive for early resumption of the six party talks. The talks aiming to end the DPRK’s nuclear program involve the USA, South Korea, Russian Federation and Japan.
Greetings from other world leaders
There were also other important political figures from all over the world who greeted the 70th anniversary of the WPK. First Secretary of the Central Committee of the Communist Party of Cuba, Raul Castro Ruz sent a greeting message to Kim Jong Un, saying:
"I send the warmest congratulations to you on behalf of the Communist Party of Cuba and the Cuban people on the occasion of the 70th anniversary of the founding of the Workers' Party of Korea. I wish the fraternal DPRK greater successes in socialist construction, extending friendly greetings to you."
Another massage was from chairman of the Executive Committee of the Palestine Liberation Organization (PLO) , Mahmoud Abbas. Abbas sent his congratulations to Kim Jong Un, to the people of DPRK and to the leadership and members of the WPK. He thanked the WPK for its struggle on behalf of the people of Palestine and wished the Korean people greater prosperity and happiness.
General secretary of the Central Committee of the Communist Party of Vietnam, General Secretary of the Central Committee of the Lao People’s Revolutionary Party and Central Committee of the Anti-Imperialist National Democratic Front also sent messages to congratulate the 70th anniversary of the WPK.