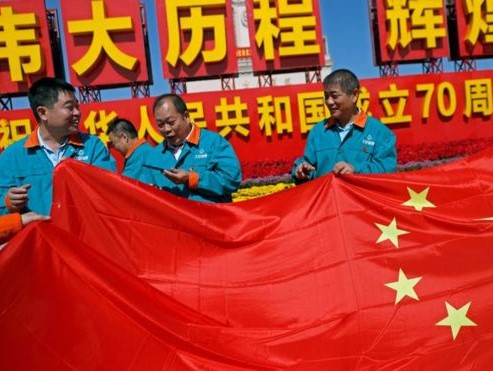 A number of Communist Parties congratulated the CP of China.
ICP, 6 October 2019
The 70th anniversary of the founding of the People's Republic of China was celebrated with a series of ceremonial events including a grand military parade that took place in Beijing on October 1. On this occasion, a number of Communist Parties congratulated the Communist Party of China (CPC).
On September 29, Chinese President Xi Jinping presented his country’s Friendship Medal awarded to the First Secretary of the Communist Party of Cuba Central Committee, Army General Raúl Castro Ruz. Cuba’s ambassador in Beijing, Miguel Ángel Ramírez, accepted the award on behalf of Raúl. On October 1, with the presence of Army General Raúl Castro Ruz, First Secretary of the Communist Party of Cuba; Miguel Díaz-Canel Bermúdez, President of the Councils of State and Ministers; and other authorities, the 70th anniversary of the People’s Republic of China’s founding was celebrated at Minfar headquarters in Havana. China’s ambassador in Havana, Chen Xi, conveyed a message from the country’s President, Xi Jinping, thanking Cuba and expressing his commitment to further strengthening the historic ties shared by the two nations.
Gennady Zyuganov, the Chairman of the Central Committee of the Communist Party of the Russian Federation (CPRF), congratulated in his letter to Xi Jinping the 70th anniversary of the founding of the PRC. He praised China's advance in industry, sciences, space research, development of modern technologies, defensive capacity, education and culture. Zyuganov noted that the PRC is playing an important role in the treatment of geopolitical issues, that she is actively participating in the works of international institutions and that she is contributing to the development of new and appealing forms of international cooperation. The CPRF leader declared that communists all around the world are following with great attention the development of China while "exerting in practice Leninist ideas about a socialist state." Zyuganov finally expressed his gratitude and willingness about the development of the strategic cooperation between the Russian Federation and China.
Petro Symonenko, the First Secretary of the Communist Party of Ukraine, emphasized in his letter to Xi Jinping how China under his leadership is carrying out a dedicated struggle for advancing her national sovereignty and the prosperity of her people, how she is striving for realizing the "Chinese dream" as the superpower of the 21st century. Symonenko wished success in China's plans and objectives for ameliorating peace and the prosperity of the Chinese people.
The South African Communist Party (SACP) saluted the Communist Party of China for its resolute and advanced leadership, and congratulated both the CPC and the Chinese people as a whole, on the milestone of the 70th anniversary of the founding of the People’s Republic of China. General Secretary Dr. Blade Nzimande said that the SACP will continue to work together with the CPC in strengthening their international relations, co-operation and solidarity, based on mutual Party-to-Party and national interests, and guided by the goals of world peace, collective human development and universal emancipation.
The National Council of the Communist Party of India sent its hearty congratulations to the Chinese President Xi Jinping, the Central Committee of the Communist Party of China and the entire people of China. General Secretary D. Raja wrote, "Indeed it is matter of proud and strength for the peace-loving progressive people all over the world to join the Chinese people all over the world and share their sentiments of joy, happiness and pride that mark the anniversary of the communist nation’s founding on October 1." The General Secretary commented on President Xi Jinping's declaration that “there’s no force that can shake the foundations of this great nation and that no force can stop the Chinese people and the Chinese nation forging ahead” as "a beacon of hope to the toiling and suffering masses all over the world."
Aleksandar Banjanac, the General Secretary of the New Communist Party of Yugoslavia, greeted the 70th anniversary of the PRC's founding as "an important milestone in China's path of building a moderately prosperous society in all respects." Banjanac underlined China's responsibility towards the world and namely her decisive "path of peaceful development." He concluded, "With a steadfast gratitude for the sincere support of China to the territorial integrity and sovereignty of Serbia we wish the People’s Republic of China many more years of peace, progress and prosperity."

Vinnie Molina, the President of the Communist Party of Australia, wrote, "the struggle of the people of China under the leadership of the Communist Party for the establishment of a socialist society has not only turned the fate of millions of Chinese but has also become a beacon of hope and progress for the rest of the world." Molina asserted that the PRC’s Belt and Road Initiative and other transnational development projects "offer much in the way of human and shared development and a strong, much-needed counter-balance to the imperialist influence of the United States of America and its allies in the rest of the world." Molina expressed his party's confidence that the Marxist leadership of the Communist Party of China will successfully steer the country through any challenges such as the sabre-rattling, economic warfare and racial vilification campaigns against the PRC.

The Communist Party of Ecuador (PCE) saluted the foundation of the PRC and the Chinese people in their "great march of revolutionary conquests and socialism." In the PCE's statement, it was put forward that the doctrinal orientation of Marxism-Leninism in China has confirmed the construction of socialism as a practical and unstoppable action in the face of the outdated capitalist system and its representatives.