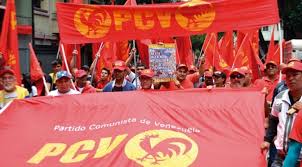 The declaration points out to the profound political, economic and social crisis in Venezuela, aggravated by the destabilizing plans devised by the US imperialism, as the reason for the joint initiative for the establishment of the Popular Front.

The declaration underlines that the Popular Front aims to respond to need to mobilize without delay the broad anti-imperialist alliance in order to defeat the terrorist and pro-coup conspiracy, to create the joint action and articulation between the revolutionary organizations, the forces of the workers' and popular movement, and the patriotic officers of the Bolivarian National Armed Forces (FANB).

The full text of the joint declaration can be read below:

The profound political, economic and social crisis in Venezuela demands the broadest unity of revolutionary and popular forces to guarantee a victory over imperialism and fascism.

The Bolivarian Republic of Venezuela is threatened once again by the actions of political violence of sectors of the extreme right in execution of a destabilizing plan devised by the US imperialism. The plan aims, through coercion and blackmail, creation of a government in the service of the US hegemony in the continent, dismantling the national liberation processes initiated in Latin America at the beginning of this century, reversing the progressive changes that have allowed workers and people in general to achieve social rights and conquests historically denied by governments that responded absolutely to the interests of the associated big bourgeoisie under conditions of subordination to US imperialism.

Understanding the high responsibility that the moment deserves, the PCV, PPT, RED, PRT, BRAVO SOUTH, VOCES and GAYONES organizations are addressing the people of Venezuela, the revolutionaries of the world and the internationalist fighters to inform that we are promoting a unitary policy to join efforts in favor of a revolutionary solution to the crisis that goes through Venezuela, having as the central axis the popular majorities, which in the end are the most genuine of the country.

The events of the world as a consequence of the general crisis of capitalism demonstrate the degree of aggravation of contradictions and the danger of imperialist wars of aggression, an expression of the desperate action of the monopolies and their representatives in the dominant governments of the world.

US imperialism has made important strategic and tactical advances by recomposing part of the correlation of forces in favor of its policies, with the change of government in Argentina, the coup in Honduras, the parliamentary coups in Paraguay and Brazil, the victory of the right to hold parliamentary elections in Venezuela, the maintenance of military bases in several countries of the region, the incorporation of Colombia into NATO, recomposing its domination on the continent to continue aggression against sovereign governments.

Consequently, Latin America is impacted and goes through a complex situation that demands that the revolutionaries to make wise analyses and take forceful actions to manage to stop the neoliberal offensive, to exit from the decline and take an offensive position, bringing the popular movement to the leadership of the social and political struggle in a decisive manner, denouncing the corruption and boycotts of the business and landowners, the exploitative violence which leads to poverty, scarcity and hunger, as well as appeasement and extractivism as ways of deepening the dependence on one or another imperialist power.

As we have pointed out, in the case of Venezuela, the most reactionary right-wing offensive has reached levels of violence with fascist traits that seek to foster the conditions for an intervention planned by the US State Department and the EU through instruments such as OAS, MERCOSUR, the Pacific Alliance, with the backing of some extreme right-wing governments in the region, which act as spearheads for the aggression already underway.

It is demonstrated that large monopolies inject money and logistics to terrorist mercenary commanders, block financing of the country, build media lobbies at global level, threaten life through terrorist actions to accelerate the conditions of foreign intervention, which they prepare day by day and which the predatory traitors have been yearning for.

We know that this is a struggle and the path of authentic unity is full of pitfalls and difficulties, but we are determined to build it on the basis of mutual recognition and respect, coming together in the struggles of the people and building a program for a good Homeland. This is because we know that the Venezuelan revolutionary process needs a collective and popular leadership that will be the voice of the exploited and will be based on humility, constancy, production and work, the only way to respond to popular demands and achieve popular rights, because the liberation of the people is the work of the people themselves.

Faced with the dangerous terrorist escalation that threatens national sovereignty and independence and the achievements of the working people, we call for a strong and coherent united response. It is necessary to mobilize without delay the broad anti-imperialist alliance in order to defeat the terrorist and pro-coup conspiracy. We urgently need to create the joint action and articulation between the revolutionary organizations, the forces of the workers' and popular movement, and the patriotic officers of the Bolivarian National Armed Forces (FANB). A PLAN FOR PATRIOTIC AND POPULAR UNITY is necessary to defeat the terrorist right and imperialism; the opposite is to act with irresponsibility, the opposite is, in practice, to surrender. We, true revolutionaries, do not surrender; we fight together until we win.

Today, since the exploited and oppressed people are threatened by imperialist forces and fascist elements who advance in their intention to exterminate revolutionary ideas, we rebel with this unitary proposal, raising the voice to rescue the dream and the hope of the popular majorities that yearn for a profound and decisive economic, political and social transformation. That is why we invite all our class brothers and sisters, from their grassroots social organizations, political parties, guilds, unions, cooperatives, social movements, communes, and other organizational forms of struggle to join in conditions of equality to this Popular Front that we are committed to build. Without unity there will be no victory and without victory there will be no future.

The PCV, PPT, RED, PRT, BRAVO SOUTH, VOCES and GAYONES, we hereby declare our firm commitment to create a wide ground to organize a vigorous mobilization and struggle based on class consciousness in order to supply, based on the people and with the people, the needs of the majorities through improvement of production and food security, overcoming insecurity and reactionary violence, opening doors for those who are willing to fight for the rights of the exploited and oppressed majorities until the victory.

Only the widest popular unity, under the vanguard of the conscious and organized working class, guarantees the defense of the Bolivarian homeland and the revolutionary deepening of the transformations with a perspective towards the true construction of Socialism on a scientific and consistent basis.

Faced with the capitalist crisis, the choice is the socialist revolution!

For a Revolutionary Constituent Assembly!