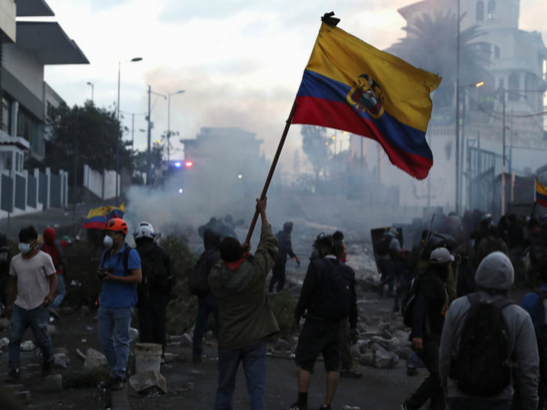 Communist Parties in solidarity with the resisting people of Ecuador and the PCE.
ICP, 14 October 2019

Ecuador's President Lenin Moreno is intended to raise taxes, liberalize labor laws and cut public spending to get more than $4 billion in emergency financing from the International Monetary Fund (IMF). On October 2, as a part of this plan, Moreno eliminated a subsidy on the price of fuel, driving gasoline from $1.85 to $2.39 and diesel from $1.03 to $2.30. Protests at installations were launched in the country's Amazon oil fields, halving the country's oil production. Indigenous people flooded the streets of Quito and even entered the National Assembly on October 8, chanting "El pueblo unido, jamás será vencido!" On October 13, after Moreno ordered a 24-hour curfew to re-establish control in government buildings and media offices, the army took to the streets. At least seven people have been killed and more than 700 people have been arrested since the beginning of the protests.

As early as the protests began, the Communist Party of Ecuador (PCE) expressed its absolute rejection of the reactionary and antipopular content of the Presidential Decree about the planned economic reform. The Party noted that the elimination of the fuel subsidy causes an increase in the value of gasoline and diesel, which objectively will increase the value of all products, especially those of first necessity. While medium and small merchants, who own a big part of the vehicles, will be seriously harmed by this change, the interests of the businessmen will be protected by the government with tax tariffs and privileges for the private sector such as the postponed payment of taxes. "Under these conditions," the Party asserted, "no one can, in reality, become an entrepreneur as the President ironically affirms. The bonds are a mask to cover up the economic aggression against the workers and people in general." The PCE defined the labor reforms as "a threat in the hands of the parliamentary majority composed of employers and the corrupt in the National Assembly." Intending to steal the rights, the government tries to decrease in practice the minimum wage and reduce vacations to 15 days. This falsifies the argument that the measures will create new sources of work since in practice they drag hundreds of thousands of public and private sector workers to unemployment. The Party declared that the orders of the IMF economic plan are getting fulfilled by the Moreno government and its Ministers to the detriment of the entire people. The PCE called upon workers, peasants, indigenous people, artisans, the people in general to take to the streets to stop the sinister hand of imperialism, of the criminal provisions of the IMF, supporting the transport sectors that have paralyzed their work in order to stop the rise of fuels and more derivatives that will objectively increase the cost of the daily life of Ecuadorians, producing food shortages and everything necessary for the subsistence of a family.

The Political Bureau of the Central Committee of the Communist Party of Venezuela (PCV) expressed its solidarity with the workers, the peasants and the Ecuadorian organized popular movement, who have been in struggle and protests against the government of Lenin Moreno, "cipayo of US imperialism". The statement of the PCV asserted that this government serves the interests of big capital and has betrayed the popular will, thus liquidating the conquests and claims reached by the people of Ecuador through their struggles. The mobilization days that have started with a national strike of the carriers became a great national mobilization of all the sectors to denounce the measures dictated by the IMF, which have been striving to align Ecuador to the politics of recomposition of the imperialist domination in the continent. The PCV denounced the actions of the government of Lenin Moreno, who subordinated to Yankee imperialism by seeking to reactivate the military base of Manta and establishing a new base of air operations in the Galapagos Islands, representing a clear threat to the peace of the region upon the increase in the military presence of US imperialism in the continent. Finally, the Party expressed its maximum solidarity with the Communist Party of Ecuador, the people of Ecuador and their various organizations that are fighting in defense of national interests, sovereignty and independence. The statement of the PCV ended by announcing, "We are convinced that our peoples must march together to face and defeat the dictatorship of great capital and work in the construction of Communism Socialism."

The Communist Party of Mexico (PCM) welcomed the general strike carried out by the workers and the people of Ecuador on Wednesday, October 9. The statement of the Central Committee of the PCM indicated that the Party followed with great attention the rebellion in the face of the shock policies that favor capital and hit the working class, the popular sectors, the original peoples. It was declared that President Moreno clearly represents the interests opposed to those of the exploited and oppressed of Ecuador, that he is a representative of monopolies and imperialism, and that is why today he unleashes a bloody repression. The PCM expressed its support to the determination of the people and workers of Ecuador to put an end to the Moreno government. It expressed total solidarity with those who fought on the barricades, in the streets, in the squares, to those who add their will to the current of revolutionary changes. It expressed solidarity with the Communist Party of Ecuador and the Communist Youth of Ecuador who, in the front line of the front, indicate the path for a new Ecuador, that of socialism.

The Paraguayan Communist Party saluted the popular uprising in Ecuador, while strongly repudiating the historical attitude of imperialists and pro-imperialist bosses, who are sharpening the levels of exploitation and total indifference towards social justice in total detriment of the working majorities who produce all but endure the daily robbery of the exploiting class. The Party affirmed that the tiredness of the Ecuadorian working class must be understood as a result of the successive violations of the rights acquired after historical struggles, rights that were progressively trampled after the advance of capitalism in crisis, a crisis that is not only economic or financial but also ecological and - above all - civilizational. The Party expressed its active solidarity with revolutionary political and social organizations, especially with the brother Communist Party of Ecuador, and in turn strongly condemned the violence against the people in resistance, as well as any other form of state terrorism. The Party demanded the immediate release of the comrades arbitrarily detained by the Police in the province of Manabí, among which was c. Fabricio García, member of the National Directorate of the Communist Party of Ecuador.

The Guatemalan Labor Party (PGT) and the Communist Party of El Salvador (PCS), announced that the economic measures promoted by Lenin Moreno and established and designed by International Monetary Fund (IMF) have been planned to strengthen neoliberal capitalism in Ecuador; therefore, these measures force the historically impoverished people of Ecuador to pay and face the capitalist crisis even though they are already submerged in the precariousness status that this production mode entails. The Parties declared that Lenin Moreno constitutes a suitable instrument to manage and represent the interests of the Ecuadorian bourgeoisie and transnational capital since he sticks to economic and political measures imposed by one of the most well-known instruments of imperialism. PGT and PCS condemned the economic measures imposed by the IMF, their implementation by the Ecuadorian government, as well all repressive actions against the Ecuadorian working-class and people. They showed solidarity with the Ecuadorian working people and joined their demand for the resignation of Lenin Moreno. The Parties demanded the IMF to leave their countries so that they can freely decide their path. Finally, it was declared in the statement that the interests of the working-class and people can only be represented by themselves and by the revolutionary organization in the permanent struggle against capitalism, for the construction of socialism.

The Communist Party of Chile declared that it shared neither the position adopted by the right-wing government of Piñera, nor that of Macri, Bolsonaro, Duque and that of the Donald Trump government since they are expressions of interventionism, of justification of repressive methods against the people of Ecuador that fight for their survival and for social justice. The Party reminded that in all countries where the interests of the United States and the IMF have been imposed, the consequences have been poverty, exclusion and misery, together with a high indebtedness of the nations. The Party expressed its solidarity with these struggles, with the forces that resist and with the Communist Party of Ecuador, which is part of these massive protests. The Communist Party of Chile urged that the Moreno government must listen to the people of Ecuador and their legitimate demands.

On the evening of October 13, Moreno and leaders of the country's indigenous peoples reached a deal. According to the deal, Moreno will withdraw the IMF package and indigenous people, in turn, will call on the protesters to end the protests and street blockades.