FARC-EP to continue the armed struggle 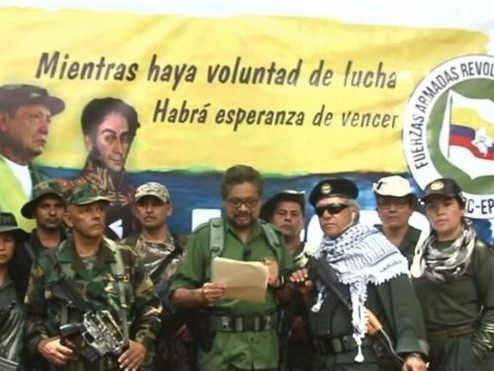 FARC-EP leader Iván Márquez announced that they are rearming.
ICP, 9 September 2019
On 28 August 2019, Iván Márquez, a lead negotiator of the Peace Accord and former commander within the Revolutionary Armed Forces of Colombia – People’s Army (FARC-EP), alongside Jesus Santrich and other ex-rebels, announced that they are rearming. Among the reasons behind this decision lie the lack of political commitment to implementing the Peace Accord, the rising number of FARC ex-combatants being killed, the conditions in which FARC combatants have had to live, ever increasing number of social leaders being killed and legal insecurity amongst other things. The Peace Accord between the FARC and the Colombian Government was signed in 2016 but was not respected by the latter. More than 150 ex-guerrillas and 600 social leaders were killed in the last three years.
On September 2, Carlos Aquino, Spokesman for the Political Bureau of the Communist Party of Venezuela (PCV), said “… We want to express on behalf of the PCV our position regarding the recent announcement of the commanders of the Revolutionary Armed Forces of Colombia — People's Army (FARC-EP) regarding the decision to return to the arms in face of the breach of the Havana peace agreement by Colombian state. First of all, the PCV defends people's universal right to armed rebellion; a right that does not depend on the desire or will of the revolutionaries, but depends on the concrete and objective conditions of struggle in said country.” He also recalled that in Colombia, since the signing of the peace agreement, more than 500 leaders from popular or human rights movements and 150 ex-guerrilla fighters have been killed, in addition to multiple examples of persecution and limitation over the peaceful and legal struggles that the revolutionary movement tries to develop in Colombia by the State and the armed forces. Similarly, the Political Bureau of the PCV has transmitted its recognition and solidarity of the different forms of struggle and actions to the different revolutionary and anti-imperialist forces of Colombia, which look for the conquest of the longed peace and the construction of a new society.
Tweet