'Everyone will eventually die, but the ideas of Cuban communists will prevail' 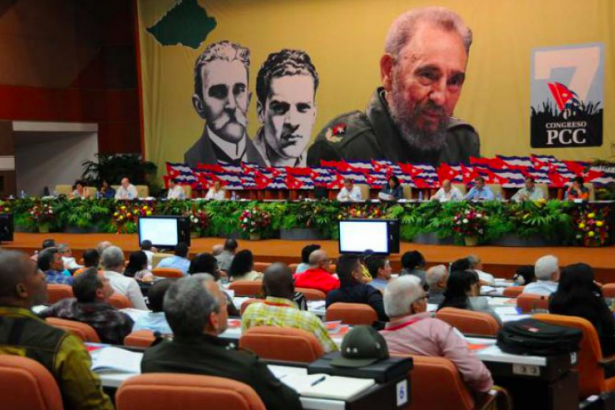 The Seventh Congress of the Communist Party of Cuba (PCC) was closed with a historic speech by Fidel.

The Seventh Congress of the Communist Party of Cuba (PCC) that was held in the 55th anniversary of the victory of Playa Giron, ended at 19th of April. The Congress fulfilled the objective to review the current economic situation in the island and to determine the political tasks of the party for creating a sustainable and prosperous socialist model. The Congress, composed of nearly 1000 delegates and 280 invitees, debated the Central Report of the Central Committee and the resolutions submitted by the four commissions, established to work on 4 different topics during the Congress.

The first day of the Congress was opened with the presentation of the Central Report by the First Secretary of PCC, Raul Castro. In the report, the reasons of the moderate progress achieved since the 6th Congress of the Party in 2011, in terms of updating the economic model of the country were identified as inertia or lack of confidence in the future, lack of preparation, control and initiative of the cadres and officials, as well as their narrow-mindedness. The report also indicated the necessity to create a reserve of party cadres to ensure gradual and sustained renewal of administrative positions in the party, the state and the government. The struggle against ideological and political subversion, the formation of values in the society and care for children and youth highlighted as strategic goals. In the report, it was stressed that the economic policies implemented for a sustainable socialism never meant any sacrifice in the sovereignty and wealth of the country, nor the welfare and safety of the Cubans. The Congress entirely and with unanimity approved the report.

The commissions that worked on four different subjects namely, on the conceptualization of Cuba’s socio-economic model, the development plan through 2030, an assessment on the implementation of the guidelines over the last five years and their updating for the period 2016-2020 and an analysis of Party objectives approved at the First National Party Conference, submitted their resolutions to the Congress on the 17th for further debate. The final approval of the documents on four different subjects will be made by the Party and the National Assembly, after another round of debates among the members of the party organizations and young communist league.

On the third day of the Congress, the delegates voted for the new central committee as well as the first and second secretaries of the party. Army General Raul Castro in the position of First Secretary and Jose Ramon Machado Ventura as Second Secretary were reelected. Raul Castro also announced the 17 members of the political bureau as well as the Secretariat of the PCC.

The election results were announced at the closing session of the 7th Congress of PCC, which was attended by the historic leader of the Revolution Fidel Castro as a delegate. In his speech, Fidel stressed that another 70 years should not elapse for an event like the Russian revolution to occur, for humanity to have another example of a great social revolution that represented a huge step in the fight against colonialism and its inseparable companion, imperialism. Fidel mentioned the possibility that his speech in the 7th Congress might be one of his last speeches. However he continued by asserting:

“...(E)veryone will eventually die, but the ideas of Cuban communists will prevail, as proof that on this planet, if you work with fervor and dignity, the material and cultural goods that humans need can be produced, and we must fight relentlessly to obtain them. "