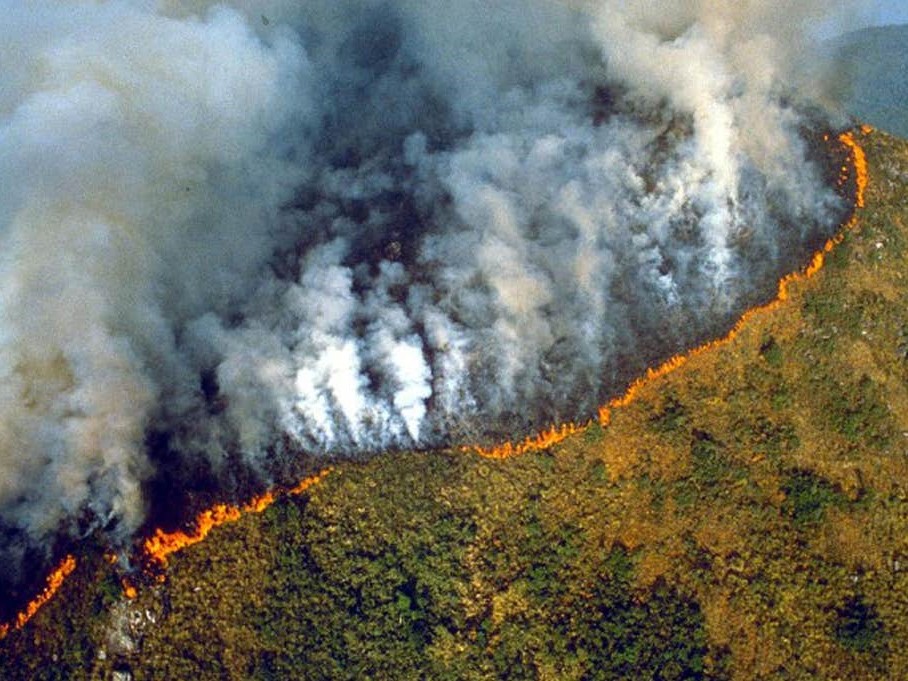 Communist Parties blame the Bolsonaro government and capitalist monopolies.
ICP, 31 August 2019
While wildfires are ravaging the Amazon, Brazilian President Jair Bolsonaro does not seem to respond to the increasing international pressure to contain fires. Bolsonaro had previously described rainforest protections as "an obstacle to economic development." Besides, it is not a secret that many capitalist companies involved in Brazilian agribusiness will score big profits from the deforestation.
On August 26, Adalberto Monteiro, the national secretary of communication of the Communist Party of Brazil (PCdoB), highlighted the importance of the unity of Brazilian society in protest against the fire in the Amazon region and blamed the President of the Republic for the environmental disaster in that region. “The burning that caused so much anger and indignation in Brazilian society," announced Monteiro, "has one responsible: it is the President of the Republic." Monteiro claimed that Bolsonaro had been carrying out a set of actions that in practice encouraged these burnings. The national secretary of communication declared, "The good news is that the broad front that is forming in opposition to the Bolsonaro government has obtained this great reinforcement with the banner of sustainable development of the Amazon. The 'Amazon is ours' flag comes from afar and again rises up in our country, mobilizing intellectuals, artists, parliamentarians, environmentalists who now reinforce this journey in defense of democracy, rights and sovereignty of our country.”
The Brazilian Communist Party (PCB) published on its website an article about the Amazon disaster and imperialist interests beyond it. The article exposes the rhetorical dispute between Emmanuel Macron and Jair Bolsonaro, in which the French government is trying to portray itself as “the greatest defender of biodiversity and of nature” while Bolsonaro rises to stand as a “fighter for national sovereignty against the colonial mentality of the Europeans." Bolsonaro's hypocritical role is strictly refuted. Instead, he is described as "a doormat that kneels at the altar of Trump and the United States." And the proof of his hypocrisy is the Mercosur-EU trade agreement that he signed, in fact, a pact of enslavement of the Brazilian workers for European conglomerates whose colonialist mentality it believes to fight with. On the other hand, by reminding that imperialism's and its monopolies' voracious interests are indeed the destroyers of the natural wealth worldwide, the article warns that Bolsonaro's brutality cannot lead us to fall into the trap of imperialism. It is declared, "In fighting Bolsonaro, we must not forget to demand that the great capitalist powers take their hands off our natural resources."
The Politbureau of the Communist Party of Venezuela (PCV) in its weekly press conference held on August 26, declared its position regarding the serious situation which affects the Brazilian Amazonian region. With respect, the Secretary for International Relations of the Central Committee of the PCV, Carolus Wimmer, said, "The PCV warns that what is going on in the Amazon isn’t fire, it is capitalism. There is a wave of information which is looking to hide the truth of the problem. The consequence of the expansion of the interests of the transnational firms in our region has naturally not only caused the exploitation of the workers and misery and hunger for the popular masses, but also the destruction of the environment." The PCV considers that it is evident that the responsibility for the situation lies with the political expressions of the Brazilian right and naturally the government of Bolsonaro, which has allowed uncontrolled behaviour by the monopoly groups in the Amazon. The PCV, in light of the crisis in the Amazon, denounced the criminal behaviour of the consortiums Bayer-Monsanto, Uniliver, Coca-Cola, Nestle, AMBEV, Bunge, BRF Food, Marfring, Louis Dreyfus, Syngenta, Cargill among others. The Party considers it the irrefutable task of the Communist Parties and revolutionary social movements of the world to stand up and struggle for the defence of nature and the biodiversity of the planet.
On August 27, the Communist Youth of Greece (KNE) held a mobilization at Syntagma Square (outside the Greek parliament), against the environmental disaster that is taking place in the Amazon. The purpose of the mobilization was to inform the people and it was followed by a protest at the Brazilian embassy. The Central Council of the KNE criticized the hypocritical "sensitivity" of the EU and G7 governments, including the ND government and SYRIZA, which both have heavy responsibilities for major environmental disasters. The KNE announced that protecting the environment cannot be left in the hands of the exploiters who are responsible for the situation we are living in, but it can become an element of the struggle to overthrow this system and those who serve it.
On August 24, The Communist Party of Bangladesh condemned the anti-people role of the ruling Brazilian government led by its far-right president Jair Bolsonaro for his anti-environmental policy. The Party strongly demanded UN action to investigate the disaster and punish offenders. On the same day, a protest gathering was held by the Socialist Party of Bangladesh in front of the Dhaka press club to demand rapid action to stop the massive fire in the Amazon. During the protest, the speakers appealed to all countries around Amazon to come to together to save it. They also demanded the immediate closure of the disastrous Rampal coal-based power plant near the World's biggest mangrove forest Sundarban.
Tweet