'A vote for PSL is a vote for socialism and liberation' 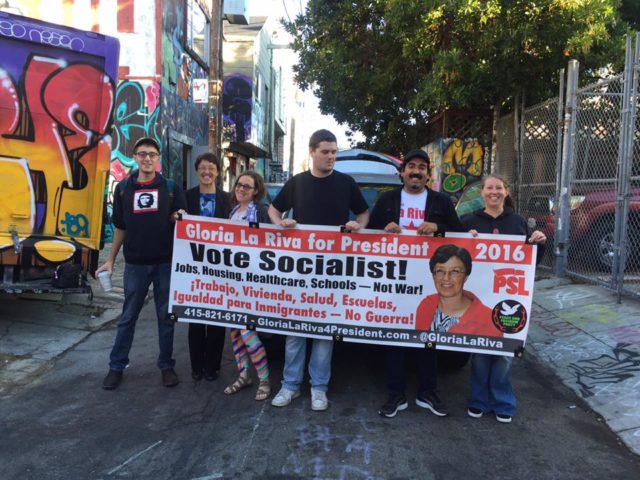 PSL to participate in the 2020 presidential election.
ICP, 2 October 2019
The Party for Socialism and Liberation (PSL) is going to participate in the 2020 presidential election to offer a genuine socialist alternative. The Party will continue to popularize socialism as the only viable alternative to capitalism and its ills, and build the movement for revolution in the United States. The Party wants to speak to the tens of millions of working-class and oppressed people who desire real change but will not get it through the capitalist electoral process. Another motive for the PSL is to expose the Democratic and Republican Party leaderships as the frauds, bigots, and warmongers that they are. The PSL points out that their candidates are different because they do not serve the interests of big capital; on the contrary, they have been fighting against capitalism for a long time.
“The world is facing unprecedented crises, none of which can be solved within the existing capitalist system. We are in a race against time. The need for the radical reorganization of society on a socialist basis has never been greater or more urgent,” says Gloria La Riva in announcing her 2020 presidential candidacy as the nominee of the PSL. La Riva’s vice-presidential running mate is the renowned Native leader and political prisoner Leonard Peltier, who has been unjustly incarcerated for more than 43 years. He was railroaded into prison by the FBI and federal prosecutors in 1976, despite his innocence. Peltier was the 2004 Presidential candidate of the California Peace and Freedom Party (PFP) and La Riva was the PFP’s 2016 candidate. They will be seeking the PFP Presidential nomination in 2020, as well as ballot access for the Party for Socialism and Liberation in many states.

In announcing their campaign, La Riva and Peltier say: “The greatest threats confronting the working class and humanity worldwide include the growing danger of new and wider wars, catastrophic climate change, and the corporate destruction of stable employment — which will have even more devastating consequences in the looming economic crisis.”

According to the analysis of the candidates, people who want to change the current state of affairs cannot rely on the Democratic Party leadership, which has put up no real resistance to the very real imminent threats, choosing instead to focus on the lie that Russia is responsible for Trump and his victory. This narrative completely hijacked the massive grassroots resistance to Trump in the months after his election, and sapped the energy of so many people who wanted to fight his atrocious attacks on immigrants, refugees, women, workers and the environment. They also remind how the Democratic Party applauded Trump on the vital issues of foreign policy.

The candidates of the PSL define capitalism as a corrupt, bankrupt system that is destroying the environment and the lives of countless millions, while the super-rich accrue obscene wealth. They promote instead socialism, which is a system where the wealth of society, created by the labor of working people.