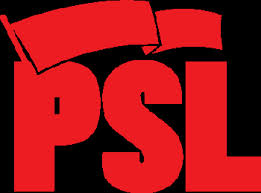 After the Iowa caucuses the Party for Socialism and Liberation (PSL) released a statement analyzing the results.

After the Iowa caucuses last week where Democratic Party nominees Clinton and Sanders were tied and the Republican nominee Ted Cruz won over others including Trump, the Party for Socialism and Liberation (PSL) released a statement analyzing the election results. The statement listed the following takeaways to be noted:

"One is that the fragmentation and division in the Republican and Democratic contests, with no clear front-runner, is likely to drag on through the majority of the nominating season.
Secondly, the various candidates continue to attract distinctive sectors of the electorate and tendencies within the ruling class. In this sense, the internal unity of both parties is being severely tested.

The ruling class generally displays a high level of class consciousness and unity, especially when in combat with poor and working people. That class of exploiters permits a certain degree of internal conflict to be expressed publicly, and utilizes the election season especially to allow social discontent to be vented safely and organized around different bourgeois trends.

This election season, however, is somewhat different, allowing highly unconventional candidates to flourish, even threatening an “extreme” electoral outcome, to quote the alarmed Wall Street Journal editorial board."

On the Democratic Party nominees Sanders and Clinton, the statement said:

"Sanders’ program is mostly a reworked version of the New Deal-Great Society liberalism that was vanquished from the Democratic Party during the 1980s and 1990s. That liberal program has represented the “soul” of Democratic Party for much of the 20th century, which is why Democratic candidates still appeal to it rhetorically while doing little to advocate for its policies.

The Clintons were the principal forces that defeated liberalism within the Democratic Party. But Sanders is proving that liberal and social-democratic policies still resonate strongly with the Democratic base. The vast majority of the Democratic electorate wants to see a country where the living standards of working people improve and that is broadly inclusive,  to some degree or another, of oppressed communities."

The statement also pointed out Sanders’ pro-imperialist foreign policy, his incorrect definition of socialism, or the illusions he spreads about how change can be won but also noted that

"...the Sanders phenomenon is, broadly speaking, a positive indicator for those who desire to replace capitalism with socialism.

For one, Sanders is, somewhat inadvertently, mainstreaming the idea of an alternative to capitalism in the most pro-capitalist country in the world. Second, he clearly is revealing there is a mass base for radical ideas. Third, his rhetoric of “political revolution” is leading to a mass of people, mostly young, arguing that the whole political establishment must be challenged and replaced to implement sweeping changes, and that the president alone cannot save them."

The statement also provided a detailed analysis about the rise of the ultra-right in the Republican front and that only mass social struggle can defeat it.

The analysis of PSL which itself is participating in the presidential elections with Gloria La Riva and Eugene Puryear, concluded with the following:

"The bourgeois electoral system cannot restrain or defeat the far right, but is likely to only facilitate its rise. The fragmented and chaotic state of both capitalist parties could lead to new political realignments and a protracted period of instability. This means preparing for sharper struggles within the capitalist class, against the far right and in defense of poor and working people.

Instead of yielding to fear and alarmism in the face of increasing polarization and instability, revolutionaries must search for new opportunities to increase the contradictions among the ruling class, to build united fronts to advance the class struggle and fight the far-right, and to expose the undemocratic capitalist system for what it really is.

This is the message of struggle that PSL members, including the presidential campaign of Gloria La Riva and Eugene Puryear, are taking into the streets, schools, workplaces and neighborhoods across the country."

For the full analysis,see the link