Protesters in US denounce Netanyahu as a 'war criminal' 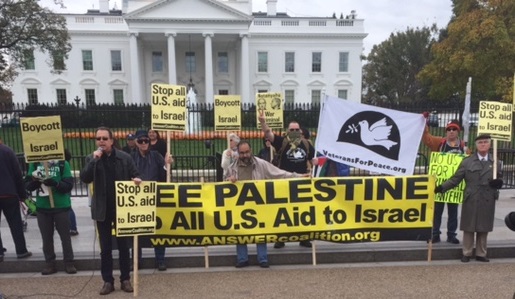 The ANSWER Coalition, held an action in front of the White House against Netanyahu's visit to Washington, DC on November 9.

On November 9, during Netanyahu's visit to US President Obama, regarding the new financial aid for the apartheid regime of Israel, a militant group of protestors held an action in front of the White House denouncing the Israeli regime and standing in solidarity with the Palestinian struggle for liberation.

The protestors came together as part of a series of actions held across various cities in the U.S. The actions were initiated by the ANSWER Coalition, of which the Party for Socialism and Liberation (PSL) is a founding member.

In  a speech he gave in the action in front of the White House, Brian Becker, national coordinator of the ANSWER Coalition, said:

“Every time the Israeli government shoots Palestinians, attacks those that resist the Israeli occupation, every time they commit an act of aggression, we, the American people are the ones who finance and pay for that because our tax dollars are funding Israel to the tune of 3 billion dollars each year. What a disgrace that Netanyahu is being wined and dined in the White house when the place he should be is in the International Criminal Court for having committed crimes against humanity.”

An earlier statement released by the ANSWER Coalition before the action said:

“Netanyahu is responsible for, among other crimes against humanity, the murderous 2014 assault on Gaza, that took the lives of 2,100 people including 500 children, wounded more than 10,000 and left hundreds of thousands homeless. Netanyahu presides over a racist apartheid system that has jailed, tortured and killed thousands of Palestinians, as Israel confiscates more and more Palestinian land every day. All of these crimes are funded by U.S. tax dollars, amounting to more than $3 billion per year!”

The statement ended with a call for action to demand: