CP USA: 'Burn the TPP, not the workers' 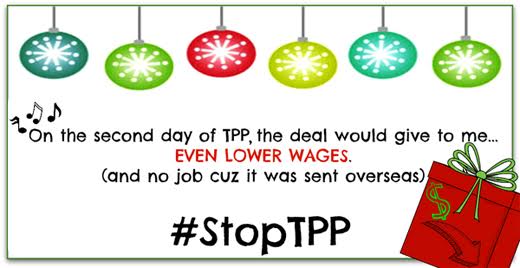 According to a recent article on TPP published by CP-USA, Middle America is smoldering. For too long, average citizens worked harder and produced more, yet corporations cut pay and benefits, off-shored community-sustaining factories, killed family-supporting jobs and crushed opportunity.

Regarding the affects of TPP on the American workers, the article mentioned:
"under the TPP, American workers would lose protections. For example, as it is now, the U.S. government can specify that tax dollars go to create jobs in the United States under the Buy America and Buy American programs. When the federal government builds a new highway or helps fund a sewage treatment plant, it has the right to specify that the steel and concrete be made by American workers in the United States.
The TPP would limit that. Under the TPP, American tax dollars spent on public projects could go to create jobs in Malaysia or Brunei. That means more American jobs lost. But look away, multinational corporations say. Don't think about those disappearing opportunities.

The TPP also would thrust middle-class Americans into a wage race to the bottom by pitting them against foreign workers paid pennies per hour and against child and forced laborers. The TPP would, for example, allow Vietnam to do absolutely nothing for five years about violations of workers' rights in certain areas while the country immediately receives the benefits of tariff cuts on its products exported to the United States. That would put American workers in competition with those in Vietnam earning an average of $150 a month."