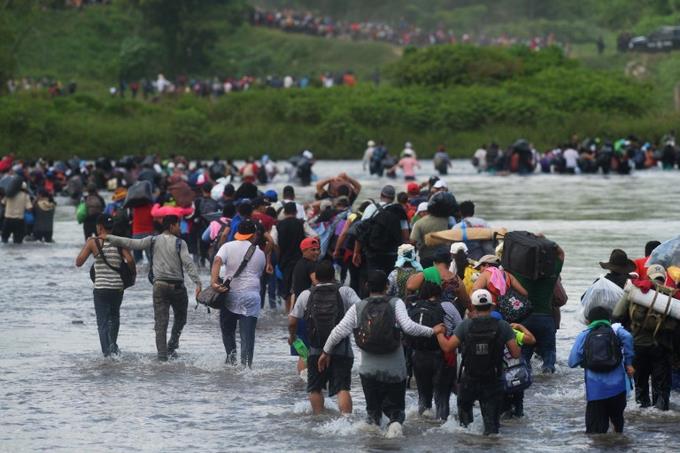 The PB of the CP of Mexico analyzed the attitude of capitalists regarding migrants and the policy of the Mexican government regarding the caravan of Central American migrants.

The Political Bureau of the Central Committee of the Communist Party of Mexico issued a statement on 7 November 2018 regarding the caravan of Central American migrants passing through Mexico to the United States. The US President Trump had threatened the migrants while the social democrat government of Mexico had taken a moderate attitute seemingly not to offent either side. The CP of Mexico denunciated the Mexican government’s attitude representing the interests of monopolies trying to take advantage of the situation while showing a humanitarian face.

The statement exposed the opportunism of capitalism regarding migration with the following assertions: ‘Capitalist policies favor migration. Thousands of workers and their families will be attracted by real estate projects in the northwest and other points of Mexico; in the so-called megaprojects that from the monopolies and the incoming government are promoted throughout the southern fringe of the national territory; in the Special Economic Zones that both on the southern and northern border have already been considered. In relation to the latter, it should be considered that the bourgeoisie favors the illegal trafficking of persons through ad hoc organizations and the constant flow of abundant labor power that allows them to crush the general working conditions of the entire working class, favor greater profit margins and strengthen the social pressures that threaten current workers. The unequal development of capitalism concentrates wealth in certain points and in a certain class while concentrating the most incredible examples of misery in other points.’

The CP of Mexico objected to the deception created with the discourse of national interest and sovereignty against migrants: ‘We denounce the anti-immigrant verbiage and the criminalization of the workers forced to leave their countries of origin behind. We denounce all those voices and actions that claim to impose the interests of the capitalists through their demands that the caravan sticks to legality and order. We do not overlook that in the legislative chambers the future government of national unity, through an alliance of the parliamentary caucuses of Morena-PRI, Morena and Andrés Manuel López Obrador have contributed greatly to this situation of anti-immigrant attack. For 12 years they have insisted and encouraged a speech supposedly in defense of national sovereignty, fed with nationalism. They make us believe that they speak of our interest, but in reality they always speak of the great bourgeois nation, of the interest of the great Mexican entrepreneurs, etc.’

According to the statement, all expressions of the bourgeoisie, from neoliberals to the social democrats, including fascist tones, converge in describing the Central American caravan as an invasion and assault on national sovereignty. ‘They appeal to civility so as not to affect "the nation" by opposing the agreements with the representatives of the monopolies in the United States and, specifically, Trump's barking about not allowing migrants to touch US soil; and to all those who launch racist attacks justified in the defense of the Mexican national interest. Monopolies speak for all of them. And in the old and new social democracy fascist elements are cooked, with or without "left" language. ... The purpose of this deafening nationalist chorus is to kneel the migrants; stir up the lower instincts of the working class in the recipient countries; dividing the workers and workers according to nationalities and slanders; place all migrants in conditions of greater harassment, illegality, anxiety, secrecy and isolation; favor measures of greater exploitation and precariousness on the behalf of the capitalists; increase the migrants’ vulnerability with respect to the entire employer class.’

The CP of Mexico exposed the hypocracy of the popular president Andrés Manuel López Obrador. The supposed benevolence and solidarity proclaimed by Obrador, the vanity of good faith by offering migrant workers positions in the construction of trains, new refineries, in business complexes in the Special Economic Zones are actually an opportunity for real estate capitalism on the northern border who are their rubbing hands. ‘Behind gestures of bourgeois humanity migrant workers would be exploited to death’ said the statement, ‘They would not be granted the right to organize, to a stable stay, with mere temporary work permits and with authority of the State to suspend them when it wishes it, with precarization, with even lower wages.’ The CP of Mexico underlined that the migration policy of the new government is identical with the bourgeois policy against previous waves of Central American migrants and the Haitian migratory flow of 2016. Even in the US, the discourse of Republicans in the US and Trump that seems to be very different from the pro-sanctuaries discourse of the Democrats, reiterated by the now ruling social democracy in Mexico City, is in fact common in that it serves the monopolies.

‘In the long run deportation awaits, ruin, the rest are exceptions’ said the statement. How many cases are there of workers or workers with 30 or 40 years of work in the US that one day are thrown out of their country of arrival, losing everything overnight? We repeat, the bourgeoisie is criminal and double-dealer.’ The statement expressed that during migration with hopes towards the future, thousands of young people or elderly people are sacrificed for the benefit of capitalist profit, murdered in secret, forced to work in agricultural fields or in the transfer of merchandise, exploited in the field of tourism or sexual offer. However, the capitalists and their governments deny or omit such facts. The CP of Mexico demanded Mexican and American States to  clarify, investigate, present and repair the disappearance of migrants, offering its support and proclaiming its determination to struggle for this purpose.

The CP of Mexico declared its ‘most sincere proletarian solidarity’ with the migrants in their passage through Mexico, which would be manifested in events at geographic points where the Party has presence. Instead of reducing solidarity to the humanist catalog of the bourgeoisie, ie. donation of clothes and coat, haircuts, food for one or two days etc, it would include ‘the denunciation, the agitation and the exposure of capitalist interests as whole.’ The statement finally said that the interest of the migrants are common with the interest of the working class. The demands included ‘comfortable hostels; public bathrooms at low cost and free; network of popular dining rooms with nutritious food; comfortable buses for transportation; hospitals that serve everyone beyond bureaucratic requirements; planning and construction of new public hospital assemblies; priority and different attention for children and the elderly; effective right of asylum; effective right to leave any country including your own with the guarantees that every State must observe; right of permanent residence, unionization, labor rights, organization as a class, regardless of the nationality of origin.’ The PB of the CP of Mexico reminded that none of these would come from any capitalist government, ‘whether it is presumed to be the heir of the "glories" of nineteenth-century liberalism and of international social democracy’, but is a task ‘that unites the whole working class in a set of shared purposes’.