The Sudanese Revolution seeks unity against US imperialism and reactionary governments 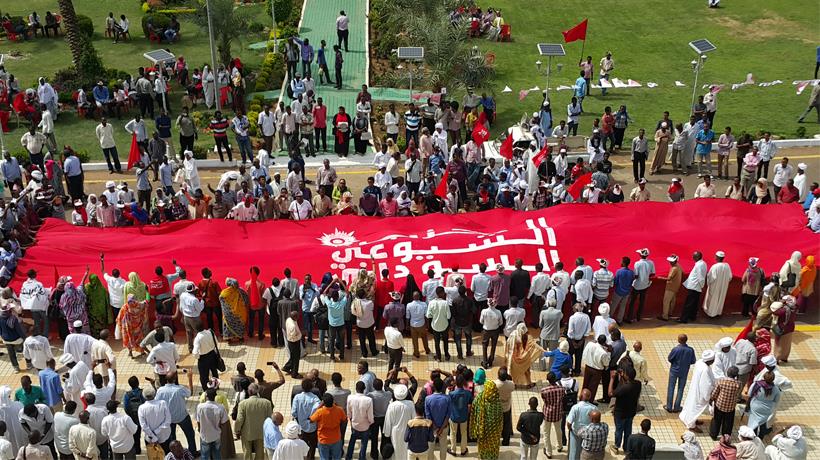 According to the statement of the Secretariat of the Central Committee of the Sudanese Communist Party, issued on 15 April, the forces for Freedom and Change, including the Sudanese Communist Party, continue to play a leading role in furthering and consolidating the unity of the masses in the streets.
The full statement is as follows:
- World imperialism, in collaboration with regional reactionary Arab governments and Sudanese army generals, staged a classical palace coup in a vain attempt to abort the victorious people’s march towards uprooting the dictatorial regime.

- The coup leaders who ousted Albashir declared a state of emergency for three months and ordered the masses of protesters to stay at home with the introduction of a curfew from sunset until morning. Millions of protesters have continued their daily mass actions, defying the curfew imposed by the new military junta.

- Defiant crowds of protesters have spent the last five days occupying the streets of the capital and other major cities and towns around the country, raising higher their voices and intensifying joint actions. The slogan “Freedom, Peace and Revolution is the People’s Choice” is echoed around all corners of the country. It has become the morning greeting of the Sudanese people.

- Due to the pressure exerted by the continued mass action, the new military junta was forced to declare the removal and detention of Albashir, as well as some of his close deputies, such as the first vice-president and the notorious head of the National Information and Security Service, Salah Goush. But the opposition forces continue to demand the immediate transfer of power to the representatives of the people grouped in the organization For Freedom and Change. In their last statement they stressed the importance of the continuation of the mass action, especially considering that the Military Council which staged the palace coup is part of the old regime.

- The Forces for Freedom and Change, including the Sudanese Communist Party, continue to play a leading role in furthering and consolidating the unity of the masses in the streets and have already scored a number of victories in forcing the removal of Albashir and his close deputies, the release of all political detainees and prisoners, and the lifting of the state of emergency and the curfew.

- The confrontation between the Military Council and the civil opposition is around the immediate transfer of authority to the Forces of Freedom and Change and the dissolution of the Military Council, respect of the rule of law and holding to account all those who committed crimes against the Sudanese people, the cessation of war in Darfur and the restoration of peace in western Sudan.

- After nearly five months of unabated peaceful demonstrations, and despite the victories scored, the opposition is still united in its struggle for radical change that includes the transfer of full authority to the representatives of the Forces of Freedom and Change, the dismantling of the dictatorial regime and its liquidation.

- As during the past five months, the Sudanese Communist Party has called for further intensified mass actions based on the cemented unity of the masses to thwart the ongoing conspiracies hatched by the USA and its lackeys to impose the project of ‘soft landing’ that aims at encouraging some week sections of the opposition to form part of the regime thus giving it a new lease of life.

- Occupying the streets and maintaining the peaceful nature of the revolution are the true strength of the Sudanese Revolution.

Furthermore, the Sudanese CP stresses the importance of increasing international solidarity with the struggle of our people as it reaches advanced levels and is approaching its goals.