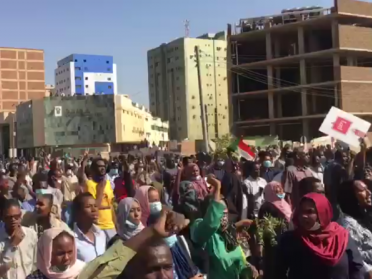 The Sudanese Communist Party declares its support to the peaceful demonstrations against the regime.
ICP, 26 December 2018
Last week, the people of Sudan took to the streets in peaceful demonstrations demanding an end to the bankrupt economic policies of the dictatorial regime and the repeal of all the recent measures based on the IMF instructions. During the mass actions and peaceful demonstrations that have been taking place in major cities all around the country for days, hundreds of demonstrators have been detained, including Hanadi Fadl, member of the Political Bureau of the Sudanese Communist Party. After the security forces received the order to "shoot to kill," by December 22, more than forty innocent demonstrators had been killed.
The Political Bureau of the Party calls for the release of all political detainees, urges the masses to demonstrate against the policies of the regime and points out that the only solution to the present crisis is "to overthrow the regime, dismantle it, liquidate its remnants and introduce the people’s democratic alternative that paves the way for the completion of the tasks of the national democratic revolution."
See the link for full statement.
Tweet