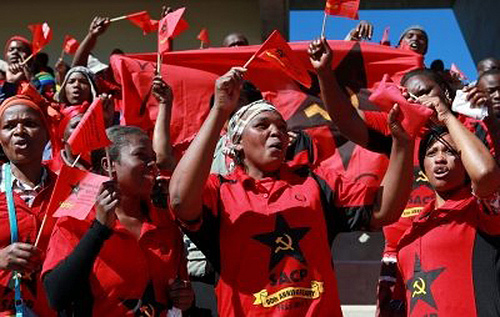 General Secretary of the South African Communist Party (SACP), Cde Blade Nzimande, launched a statement explaining the theme of the Red October Campaign for 2015/2016.  Nzimande stated that the campaign will be based on the principles of: “Unite the working class, our communities, and our movement!” .

The two main themes of the Red October campaign are stated to be the struggle for "transforming the financial sector and build banks that will serve the people" and "freeing the media".

SACP calls the working class to unite to overcome the neoliberalism and financialisation. The Red October Campaign claims for the transforming the financial sector:

For the free media:

Red October Campaign statement also stresses on the unity of the SACP saying:

" We must unite against private monopoly capital not only on the financial sector but in all other sectors of our economy, in all terrains of struggle and power!

The SACP will continue to focus on this revolutionary task to unite the working class, our communities, and our movement!"