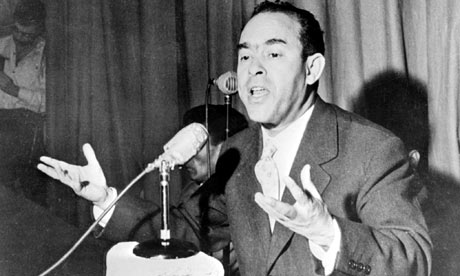 PADS considers the Moroccan and the French states responsible for Barka's assassination along with the complicities of the Israelite and American intelligence agencies.

Socialist Democratic Vanguard Party (PADS, Morocco) released a note of communication paying homage to the revolutionary leader Mehdi Ben Barka “for the truth, against the oblivion and against the deception of the Moroccan people”.

The PADS invites all the democratic forces to his commemoration and to ask for the condemnation of all the political crimes and demand for no more protection of  the killers.

Mehdi Ben Barka had been kidnapped in Paris in 29th of October 1965. PADS considers the Moroccan and the French states responsible for his assassination along with the complicities of the Israelite and American intelligence agencies. PADS statement continues with the headlines as follows:

It is underlined that the kidnapping coincided with the Tricontinental Conference, the predecessor of the OSPAAL (Organization of Solidarity with the People of Asia, Africa and Latin America), which would have been presided in Havana by Ben Barka in 1965.